Welcome to one of the most beautiful coastal areas in the United States.  Stretching from  the North at the Outer Banks  through Cape Hatteras and Ocracoke Island, to Cape Lookout and the National Seashore, to the Crystal Coast with the Historic town of  Beaufort and the fishing center of Morehead City, to Wrightsville Beach and Wilmington in the South. Blackbeard lived, pillaged, and died in these parts.   With the discovery of an ancient shipwreck in the Beaufort Inlet in 1996, it is becoming clearer that his ship, The Queen Anne's Revenge has been discovered.  Here you can read about the Pirate, his legend, his ship, and the shipwreck recovery efforts.

Thousands of artifacts have been recovered from the presumed site of The Queen Anne's Revenge,
Blackbeard's ship.  10 years after the discovery of the
site, the recovery team held a press conference to
show the results.  Click here for the photos. 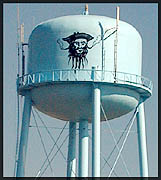 Click here for Blackbeard's Tale,
the terror of the NC Coast

Blackbeard's Ship the QAR
Click on the ship to learn more.! 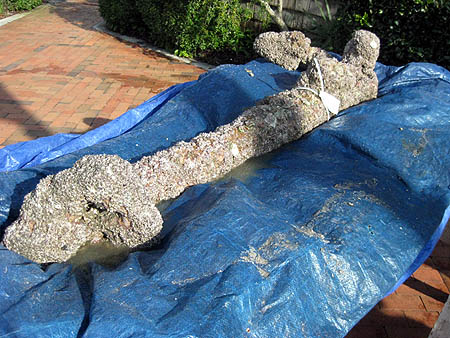 October 2009 divers recovered an anchor from the
Queen Anne's revenge, and it was displayed for the
press and public in front of the Maritime Museum. 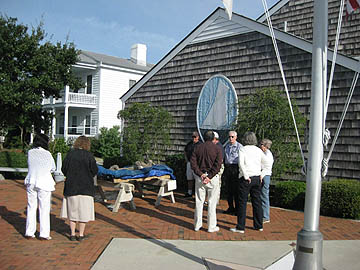 -Blackbeard's Ship, the QAR,  is still underwater in just 20 feet of
water just off of Fort Macon.
Smaller items are on display in the N.C. Maritime Museum or the Conservatory
such as the Ballast stones below 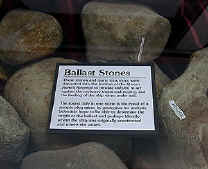 How to Get to Beaufort and
Coastal North Carolina
by Land, Sea and Air

Dining and Lodging Guide
for Beaufort and Carteret Co
Click Here for Listings.

Click to Visit Beaufort, Take a House Tour, and drop in on the
Beaufort Historic Association